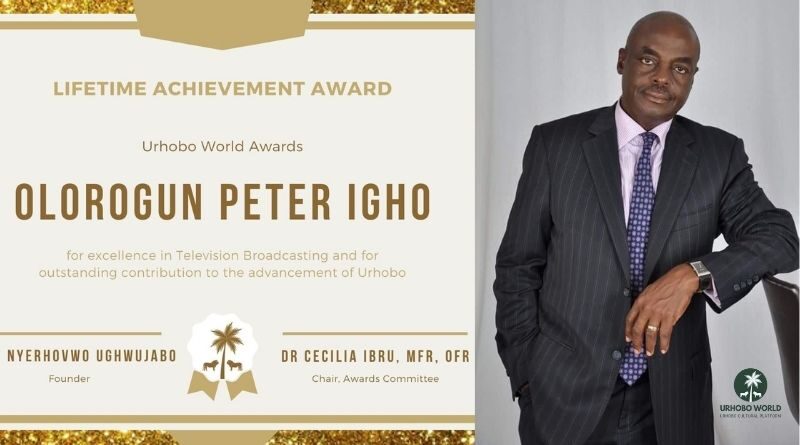 The celebrated broadcaster, Olorogun Peter Igho was presented with a Lifetime Achievement Award on 7th October during an Urhobo World Live interview.

Olorogun Peter Igho was a legendary television producer, writer, and entertainment industry pioneer; particularly in the golden era of television before the modern era of Nollywood.  He was responsible for numerous productions, including household names like Cock-crow at Dawn, Mirror in the Sun, New Masquerade, Second Chance, Behind the Clouds and the internationally acclaimed Things Fall Apart; Peter Igho has left an indelible mark.

Urhobo World held a live conversation with Olorogun Igho to discuss his body of work and his numerous achievements over the years.    The conversation explored his journey through television, his philanthropy, and service to the Urhobo people.   Olorogun Igho started his career as a teacher and rose to the esteemed position of Executive Director of the Nigerian Television Authority.   After retirement, he was appointed Director-General of the National Lottery Regulatory Commission, a Federal Government parastatal in the Presidency.

Urhobo World’s Awards Committee felt that Olorogun Igho had merited the Lifetime Achievement Award for excellence in television broadcasting; for supporting Urhobo people in the entertainment sector and his philanthropy within Urhobo land.

I am really touched by this award, it’s unexpected but quite welcome.  A prophet is never honoured in his town, but I am getting the honour today from my own people, and that’s big for me, thank you very much, I really appreciate it.

‘I congratulate Peter Igho, his achievements are laid bare for all to see; his works in television drama have produced some of the very best drama in the history of Nigeria; with obvious references to the storytelling nature of the Urhobo people.  He has done us all proud.  We also recognise his contribution to the employment prospects of numerous Urhobo people and indeed his support to Urhobo communities.  This is a man who is worthy of emulation and a shining example to our young people’.