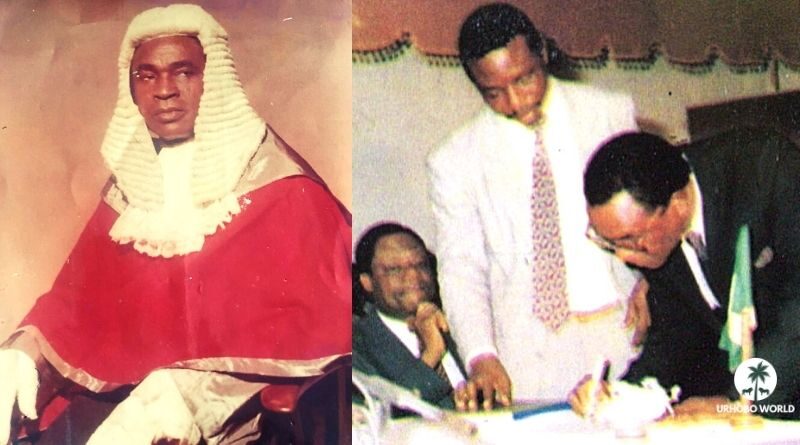 He was a man who was close to his people and kindred. He was an Agbarho Chief with the title of OKPOWE from his paternal home, an Ohovwore of Okpara Town, his maternal home and OKAKURO of Agbon Council of Chiefs where be served and supported his late cousin, the first King of Agbon, HRM Chamberlain Orovwuje Ogurimeme Okpara I, the immediate past Chairman of the Traditional Council of Chiefs of Delta state. His traditional title of (Okpowe) meaning “a big pond that never dries up”, shows the deep knowledge and wisdom with which he was blessed. He was fondly called Okpowe by his admirers and loved ones and lived a fullfilled life and his legacy still remains one to behold for generations even yet unborn.

He authored the Agbon Kingship Constitution on his return from the United Kingdom as a young Legal practitioner.
He also founded the Agbarho Elders Consultative Forum upon his retirement which was made up of retired and serving elder statesmen to push forward the development of the Agbarho people. He was the first Chairman and designed the Agbarho king’s palace which was completed by the Gen Dominic Oneya led Building Committee.

Due to his brilliance and academic success at Kings College Lagos, he was picked as the first Agbarho indigene deserving of UPU Agbarho scholarship to study Law in London. He set the pace in his academic career as the first generation of Urhobo graduates to leave the shores and comfort of Nigeria to far away London by ship and successfully came out with flying colours truly representing the indefatigable Urhobo resilient spirit and strive for excellence.

His stint as a legal practitioner started at Robert Road, Warri in 1958 as one of early pioneers of Urhobo lawyers in Warri before bowing to pressure and the invitation to join the bench as a magistrate in the 1960s. Here again, he was amongst the first set of Urhobo men to join the Nigerian Bench along with the likes of late Hon Justice Ayo Irikefe who became Chief Justice of Nigeria and Hon Justice Ovie-Whiskey, former Chief Judge of Bendel State and Chairman FEDECO, the election body that supervised the Nigerian elections of 1979.

The Late Justice Akpovi’s love for the things of God and man, extended to his input in the growth of Catholicism in Nigeria, Bendel State and Urhoboland. An attestation from the Papacy in Rome clearly shows his good works and generosity did not go unnoticed. He rose to be a Knight of the Order of St Mulumba and was also an Extraordinary Minister of the Eucharist joining the Catholic priests in serving holy communion, a rare privilege in the Catholic Church
.
The Judiciary in the defunct Bendel (now Edo and Delta states) still stands strong today as a result of the great foundation and benchmarks he set as checks and balances in the realm of government.

It is no suprise that till date, his name still resonates as a pillar of UPU, a pacesetter in the legal profession and Nigerian judiciary and a great brain behind the success story of Agbarho, Agbon and Agbarha kingdoms in Urhoboland and Nigeria.

Dear Papa, continue to rest in peace in the bosom of our Lord and Saviour Jesus Christ, Amen.